Zion.T is a South Korean born R&B singer/songwriter currently signed to The Black Label, a subsidiary label of YG Entertainment. He made his official debut in 2011 with his single Click Me featuring rapper Dok2. During this time frame he was also collaborating with artists such as Simon Dominic, Primary, and Crucial Star.

Zion.T wasn’t what you would call an overnight success. He admits that for a while he had trouble writing music that could truly connect with people, and he found himself becoming very self-conscious about his music and his unique singing voice. However, rather than admitting defeat, he continued working on himself and his music. Sure enough, the work paid off when he was able to cultivate his own music style in his first studio album Red Light which featured his break-out single Babay.

For a while, Zion.T’s biggest stand-out feature was his dark (usually mirrored) sunglasses. First starting out, it was pretty difficult to find photos without them. He explained that he felt that he looked “too kind” without him, and he also pointed out that he wasn’t that confident in his looks to begin with. Having the sunglasses on allowed him to get a better sense of confidence, and added some mysteriousness to his demeanor.  If he wanted to go out without anyone recognizing him, all he had to do was dress down and leave the sunglasses at home. Eventually, however, he started to open up and began showing up on television talk shows without his sunglasses (though they’re still considered his signature look). Now that people are familiar with his looks, there’s no more getting out of the house without being recognized! And for your enjoyment, here’s a shot of him without them (plus braces). 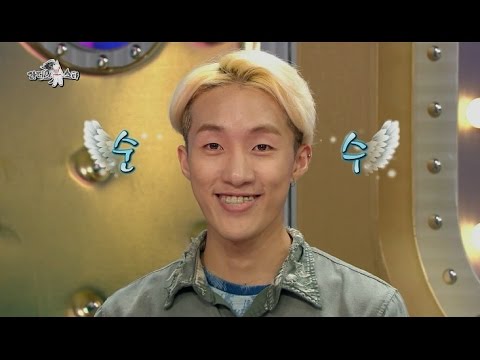 I can’t talk about Zion.T without acknowledging his distinct singing voice. While comedians and other singers do enjoy sharing their Zion.T impressions, it is acknowledged that his voice is both unique and captivating. I think the best example that exemplifies what I’m talking about would be his single Yanghwa BRDG a touching ballad revolving his humble beginnings and his desire to be a key provider for his family. The song did excellent on the music charts and attributed to his rise as a distinguished singer/songwriter.

Zion.T’s efforts to become an artist that connects with his audience really comes to light with singles such as Yanghwa BRDG and Eat(꺼내 먹어요). These singles in particular not only highlight his atypical yet simplistic singing style, but also draw in the listener with relatable and authentic lyrics. In the second chorus of ‘Eat’, he states:

When you’re hungry
Take this song out like a morning apple and eat it
Even if you’re tired, make sure you eat breakfast and lunch
Then you’ll sleep better later at night

In this song, the narrator consoles and comforts his lover, who is emotionally drained from her busy schedule and daily life. He states that a lot of his songs come from a personal place; they are songs he wants himself and people close to him to hear. Arguably, that could be what makes his music so attractive to his listeners: authenticity. When Zion.T wrote “Eat”, it was so his love interest would have a song to listen to when she’s feeling stressed and overwhelmed. After all, asking someone if they have eaten is just another way to express your care for them; an indirect way of saying “I love you and I want you to take care of yourself”.

The last single I’d like to highlight is one of my personal favorites, Just 그냥, which is a collaboration piece with R&B singer Crush of Amoeba Culture, Zion.T’s former record label.  This smooth R&B single depicts the narrator in a more realistic stance after a break-up, not pretending to be chummy with his ex and advising her to “just pass me by” instead when they come across each other in public. While the narrator may be a bit heartbroken, he’s still uninterested in his ex-girlfriends’ sympathy. This single was considered a smash hit, topping the charts for several weeks after release.

Before leaving the agency, it was well-known that Zion.T and Crush were very close friends. However, a rift came between the besties after it was announced that Zion.T would be leaving the Amoeba Culture label. Fans took notice when Crush unfollowed Zion.T on his social media and removed their photos together. Many assume it was Zion.T’s decision to leave the label, but nothing was ever really confirmed as to why the two fell into disagreement . After some time, they eventually made up earlier this year. The two were seen embracing on stage in this touching video right before performing their single “Just” at a showcase. While the two are on good terms again, they have not released any music together since Zion.T’s transition out of the label. Hopefully we can see something else come from this duo very soon.

I’ll admit that I’m incredibly biased here (he is, after all, my celebrity husband), but adding some Zion.T to your playlist is the best thing you could do for your music collection. Check out his newest mini album, ZZZ which features leading single ‘Hello Tutorial‘ with Seulgi of popular girl group Red Velvet.